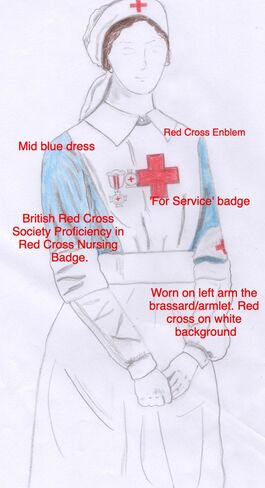 Uniform and Badge Information Courtesy of:

A blue dress of specified material  to be in one length from throat to ankle, and sufficiently full to be worn, when necessary, over ordinary dress. To be buttoned in front under a two-inch box pleat, slightly gathered in front at shoulder and neck and finished with one-inch-wide neck-band on which to fasten white collar. The bottom of skirt to have a two-inch hem and two one-inch tucks. Ground clearance four inches.
The sleeves shall not come below the elbow.

A starched Sister Dora cap was worn. A one piece pattern, with a three inch hem to turn over in front which is square, the other part being rounded having a narrow hem and a flat tape stitched around the hem and 12 inches in from the edge, through which a narrow tape is run for drawing up.

A white apron with the Red Cross emblem displayed on the bib. Made of linen, with bib pleated in band and continuing in straps (without join), cut in three widths and pleated in band at sides. On both sides is a large square pocket stitched on, the front part of pocket having a narrow strip continuing upward and stitched in the two-inch waist-band, fastening at back with linen button, the straps crossing over and also buttoning about five inches from either side of centre at the back. The Red Cross of Turkey twill, 4inches in height and length, of the authorised Geneva pattern, with each limb 1 inch square to be sewn on centre of bib, the bottom of apron being finished with a two-inch hem. Length to be the same as overall.
Sourcing the red fabric proved difficult during the war, so many aprons were missing a Red Cross.

A starched white linen belt, two and a half inches wide, starched, to be worn over apron.

Advanced certificates – there were three advance certificates, granted for a second success in first aid, home nursing and hygiene and sanitation. Must be 12 months since previous exam

Proficiency badges – these badges were only issued to bona fide members of British Red Cross VAD. No other persons were allowed it. Granted for a third success in first aid, home nursing and hygiene and sanitation. Must be 12 months since previous exam. Must have an advanced certificate or two certificates in the individual subjects – 12 months

Bars – were granted to each of the three proficiency badges. For the fourth and subsequent success in any one subject
Technical badges – issued to medical officers, pharmacists, trained nurses