NURSE DUNFORD
British Nurse's days tending wounded in town that was taken and recaptured many times.
Article from The Daily Mirror 1914 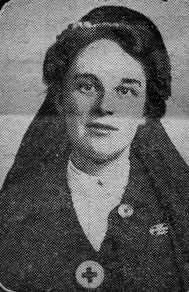 Nurse Dunford was several times in turn a German Nurse a French Red Cross Nurse. Finally, she escaped into Switzerland and now she wears the Netley (Queen Victoria Hospital, Netley. Southampton) badge and is only awaiting equipment to offer herself for service with the British Expeditionary Force.
She has such a frail little body, one wonders how much strength of mind is possible in so weak a frame. But she has the proper British spirit and is a Cockney to boot.

"I was captured and told I was a prisoner directly as war broke out. I had taken an invalid lady from London to Germany and she left me in Mulhausen (North East France) and went to Berlin saying that I should have a better chance of getting away from Germany if I stayed in Alsace"

"Over 300 wounded Germans were brought onto our little base hospital on the first day of fighting, the Friday night. The Germans evacuated the town in the early hours of Saturday morning and the French came in and I became a French Red Cross Nurse. Fighting was terrible in the next few days. The French were driven out and I once again became a German. Once again the French took the town at the point of the bayonet and for five more days I was a French nurse"
The French had to leave to go to help in the fighting near Metz. I did not know what I was for three days and then the Germans came back and up to the time of my escape I was a German. In our hospital there were two German sisters and myself - and a trained nurse attached to the North Eastern Hospital. We never had less than fifty badly wounded soldiers. It was a base hospital and we only kept cases until they could be moved. French wounded were kept apart from the Germans but they were not badly treated. I was hardly allowed to go neat the Germans, particularly the officers"

"There was story of the local inhabitants firing on the Germans and one night in the poorer part of the town all the women and children were ordered onto the streets and were kept there all night by guards with fixed bayonets. They were told by a German officer that they were all going to be shot in an hour. Instant shrieks from the women could be heard and the officer told them to stop screaming or they would be shot now. In the village of Reidesheim eight catholic priests were shot in retaliation for the locals firing on the Germans"

"When the French took the town a second time several houses on the line of advance were marked with the Red Cross but the Germans used them to fire from. They have also fired on their own base hospitals, killing a German nurse and a wounded soldier"

"One evening I was sent to attend to a convulsing baby belonging to an Alsace family. There was no doctor available and I did the best I could. Fortunately it pulled through. I visited the family on several occasions and the mother asked if I wanted to try and escape with her and her baby. I was willing and went with her in a Red Cross Van to Basel. They kept me for five hours on the Swiss frontier saying my certificates were forged. I was eventually allowed to pass after the Mother said her baby would die without attention"

Miss Dunford said that the German Red Cross vans were fitted with machine guns and then taken into the action. Also the German ambulance men were armed. "I asked one why he carried a pistol and he said it was to finish off wounded horses"

"I could only bring a few trinkets and my papers with me and have lost my nursing equipment. As soon as I get fixed up I want to go to France or Belgium with a British ambulance"

So this frail little women is once again going to do great work among her own people.