A letter from the Principal Matron.
Territorial Force Nursing Service
No. 3 General Hospital. County of London
October 1915.
An article written for the hospital Gazette by Eleanor C. Barton
​ 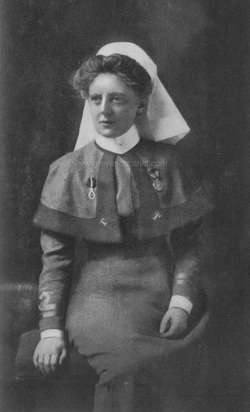 In wishing success to this new literary venture at the 3rd London General, I thought that a few words as to the early history of the Hospital might be of interest.
​It must have been some time in 1908 that, in company with many other matrons, I was invited to a meeting at the War Office, presided over by Lord Haldane. At this meeting the scheme of the Territorial Force Nursing Service was discussed. The idea was explained that there should be twenty-three Territorial Hospitals for England, Scotland and Wales, each with an Organising (called afterwards a Principal) Matron, working under a under Matron-In-Chief. Subsequently at meeting at The Mansion House, the details of the scheme as regards London were arranged and the organsising Matrons chosen for the four London Hospitals. I had the honour of being appointed to the 3rd London.
We were instructed to keep register of 120 trained nurses, including 2 matrons and 30 sisters and 88 nurses, who would be ready to be called up in case of invasion or of imminent national danger. This list would allow of a reserve, as only ninety-two would be required at first. The address of each member would be kept up to date and their reference verified very year. It may be of interest to mention that for the first year the names in the register are in Miss Holden's writing, as she was not only one of the prospective matrons from the commencement , but also helped me as a most efficient Honorary Secretary. I owe much gratitude too, to the members of our Standing Committee, who were always ready to meet and assist in any way they could.
It was not always easy to keep together a phantom army of nurses, and, as the years went on and there was no sign of national danger, some few resigned, but on the whole the nurses were wonderfully faithful. The greater proportion of those at present in the hospital were on the roll from the commencement.
in 1910 Queen Alexander summoned us all to Buckingham Palace to receive the badges she had designed, and to which all our members wear. From time to time entertainments were given to which members of the four London Hospitals were invited, and there was concert every year at the Mansion House. One year Lord Haldane gave an evening party; on another occasion Lady Truscott entertained the Territorial nurses. These occasions afforded an opportunity for the different members to meet, and helped to keep up the esprit de corps of the Service.
​It was while undergoing a course of training at the Netley Military Hospital that I had the pleasure of meeting Colonel Bruce Porter, our commanding officer. He was anxious to get into personal touch with the nursing staff of his hospital, and to impress on them that the 3rd London was to be the best possible thing in hospitals. He subsequently came to a meeting at Chelsea, where as many of his staff as possible were gathered together, and where he introduced us to our Matron-In-Chief Miss Sydney Browne.
As can be easily understood, during the early days in August 1914, there was general flutter of excitement among the ranks of our Territorial nurses. I shall never forget my feelings when our C.O. rang me up one evening and said the cryptic words, "Miss Barton, war is declared,. Mobilise." The telephone was shut off- as these were times for deeds, not words - but it gave one somewhat to think about and to do.
Other writers, I feel sure, will describe the early days in the hospital, when sisters and nurses arrived in batches from different parts of the country, animated with the keenest patriotic spirit, and ready to turn their hands to anything there were called upon to do. It was most interesting to watch the work being carried out under these auspices.
I should like to say, in conclusion that my most optimistic hope for the success of the Hospital- which had so long existed as castle in the air have been far more than realised. Not only the ability and skill, but also the zeal and loyalty shown by the nursing staff have been beyond praise. From the highest to the lowest each in their different ways have brought an enthusiasm and a spirit of personal service into their work which have made the Hospital the great success that it undoubtedly is. I feel extremely proud to be a member of the nursing staff.
Eleanor C. Barton