The Origin of The 3rd London General Hospital.
​ Article from the Hospital Gazette, dated February 1917 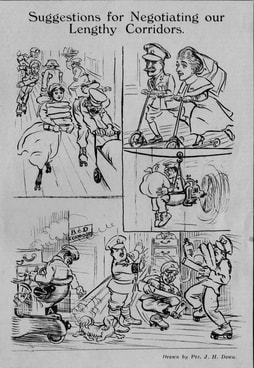 On July 1st 1859, the London suburb of Wandsworth witnesses a noteworthy event – the opening of a noble institution for the benefit of orphan daughters of soldiers, sailors and marines. The Royal Victoria Patriotic Asylum as it was called, was the outcome of the Crimean war. It had been established and endowed from the Patriotic Fund which that tragic conflict evoked, its foundation stone laid by Queen Victoria the greatest of British sovereigns.
The fine edifice, grey and dignified, standing in the midst of its own beautiful lawns has seen the coming and going of many orphan girl children since then and it is alas, likely to be the home of many more. But for the moment it has been emptied of its usual inhabitants who are housed close by) and The Patriotic School as it is locally named has been converted to another but wholly appropriate purpose. It has been made the nucleus of a War Hospital, the 3rd London General, now one of the biggest in the British Isles.
This transformation took place automatically in August 1914, in consequence of the far-sighted arrangements made by Sir Alfred Keogh. When the Territorial Force was founded, it was Sir Alfred Keogh who planned its medical organisation and under his scheme certain public buildings were ear marked for hospitals in the event of war. The Patriotic school at Wandsworth was one of those buildings and the promptitude with which it was occupied for its present use may be gathered form the fact that already on August 5th 1914 – the day after the declaration of war twenty NCO’s and men had arrived
(under the charge of the late Maj. Miller) to make the initial preparations; while Lt. Col Bruce Porter the hospitals Commanding Officer was simultaneously busying himself at headquarters with the negotiations for equipment.
The metamorphosis of the school into a hospital was an extremely complicated task: not only had all the schools furniture to be removed , but many structural changes were made – the windows altered, hopper sashes put in, lavatories and baths attached to those rooms which were to become wards and so forth. In this rapidly performed though laborious task the NCO’s and men to whom the first credit is due were supplied from the Unit (founded long before the war and gallantly kept up even at a time when peace seemed assured) by the city firm of Messrs. Hitchcock, Williams and Co. Sir Alfred Pearce Gould, the late Sir Victor Horsley, Capt. Humphris, Capt. Dodson, Sir Shirley Murphy, and Col. Russell, assisted all its details. The hospital’s staff (medical and surgical) was supplied from the Middlesex, St Mary’s and University College Hospitals – these provided virtually the whole of the officers available on mobilisation.
Almost immediately, it became apparent that the size of The Patriotic School would be insufficient and the first of the extensions (now known as the Letter Block) was put in hand. The long corridor of huts (and operating theatre) was built in the short space of eight weeks. Its architect was Mr Pain Clarke and when completed the hospital had 520 beds.
It now has 1,800 for vast new extensions have been added, stretching out beyond the original hospital grounds on to land which had been prepared as a recreation space for Wandsworth by the London County Council. These extensions which include not only the magnificent wards (of a new pattern) but also kitchens, recreation room, new operating theatre, xray department, stores bathrooms and boardroom, have enabled a portion of the main building to be taken for office purposes. The bungalow town as the ward huts have been called now shelter the largest proportion of patients, the affection of all will continue to centre around The Patriotic School. The memory of its impressive façade and turrets rising in silhouette against  the pale sky of the Metropolis will be carried home to many a far county of these islands and many a colony of that Empire of which London is the heart.